Jozef (Joe) Putcuyps and Elena Musta­fina, partners in both marriage and business, have established the Putcuyps-Mustafina Legacy Fund in support for the EAGE Student Fund. 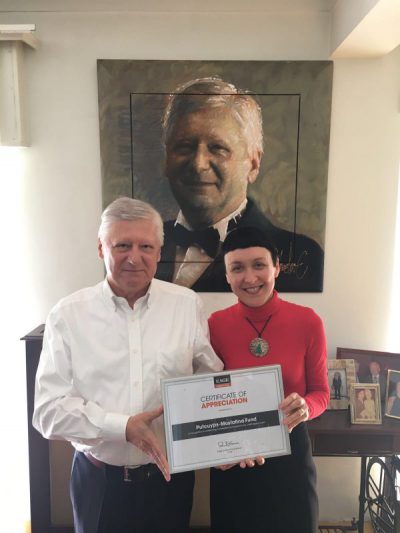 As long term members of EAGE and its predecessors, Putcuyps from 1982 until recent retirement along with Mustafina since 1997 and still active, have ‘lived the life’ of the geophysical industry for many decades. Their com­panies, first FXC Energy and later M+P Enterprises have been active in seismic exploration, freight forwarding and real estate.

Putcuyps, a Belgian national, is a veteran of more than 45 years in the oil and gas industries. As a business (non-technical) graduate he is a rare breed in the industry having worked in downstream (refining), mid-stream (pipeline construction) and upstream (seismic exploration) mostly for US companies but since 1987 as a private entrepreneur.

He spent 15 of these years living and working in Algeria, Chad, Saudi Arabia, UK and USA, followed by more than 25 years spending half of his time in the Former Soviet Union where he met Elena, now his wife and business partner. He was active in promoting the USSR oil industry in the West assisting in the formation of some of the early exploration ventures and in seismic equipment sales, setting up local seismic companies and helping Russian seismic contractors get work in the international market.

Putcuyps was, from 1998 until retire­ment two years ago, chairman of the Bel­gian National Committee for the World Petroleum Council (and now honorary chairman) and as such participated for many years in the World Petroleum Con­gresses and Council meetings. Having travelled in more than 100 countries he has a very international view, one of the reasons for choosing to fund the EAGE Student Foundation, a truly international organization.

Mustafina was born in the Soviet Union and is now a Belgian national. After a language degree she joined one of Putcuyps’ joint-ventures in Russia and quickly became his personal assistant. After completing her MBA in the UK she rose rapidly to become the Managing Director and the pivotal force in man­agement and with the clients. She holds numerous directorships in her own and affiliated companies.

The EAGE Student Fund recognises their commitment to the future of geosciences and appreciates their kind and valuable support to the Fund. If you would like to learn more about the Legacy Fund or contribute, please contact us.

An article about this fund first appeared in First Break, July 2017